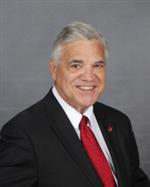 The Clear Creek Amana (CCA) school board of education approved the hiring of Joseph Brown Sr. as the Interim Superintendent with his contract effective August 1, 2021. Mr. Brown is an Iowa native but comes most recently from Fairmont Area Schools ISD in Fairmont, Minnesota where he has served as the Superintendent since 2010. The CCA school board interviewed 4 final candidates for the interim position on July 8th and 12th.

At Fairmont, Mr. Brown served a district of 1,700 students and combined teacher and support staff of 250. He was instrumental in passing a $6.7 million bond for an expansion of a Vocational Trades Academics Building this past February with a 67% approval. He oversaw the construction of a new preschool through 2nd grade elementary school, eliminated a projected budget deficit of $1.5 million, expanded the ECFE program for three and four year old students, served as chief contract negotiator for all employee groups, implemented their Agriculture Academy and Welding Academy and was a graduate of the Martin County Leadership Program.

Mr. Brown has also served as a Superintendent/5-12 Principal for Grand Meadow ISD for five years and prior to that he was a Principal for grades 9-12 at Austin High School, K-12 Principal for Chicago International Charter School, 7-12 Principal for LaSueur-Henderson (LeSueur, MN).  Mr. Brown was raised in Clinton, Iowa and has the following degrees; AA from Mount St. Clare College, BA from William Penn College, MA from University of Iowa, and 6th Year Administrative Degree from Minnesota State University Mankato. He will be starting his 27th year as a public school administrator (10 years as a high school principal and 16 years as a school superintendent). Prior to working in education administration, Mr. Brown has been in a variety of positions in the private sector and public service as an Iowa State Senator for two terms serving the 35th and 27th Senate Districts. The 27th District covered most of Johnson County and all of Iowa and Poweshiek Counties.

“I am really excited about serving as the interim superintendent of the Clear Creek Amana School District for the next 11 months.  This is a great time for public education.  Our students deserve access to quality education delivered in a physically and psychologically safe environment.  I am aware that CCA is a rapidly growing district.  This provides positive challenges for the entire district to be flexible in providing relevant and rigorous education for all students,” said Mr. Brown.